at the home of Tom and Jeannette Jaquish, off Sherman or Wells -- go west.
260 484-5946
Bring anything to eat or drink to share. Bring guests.
Kids welcome. Two small dogs in home.
We will play Political Charades and "What Could Go Wrong" Political Improv, listen to political parody Christmas Carols, and make a Wish List of Libertarian events, offices to run for, and projects for 2017. This is a good time to bring new people as we analyze the past and begin new projects. 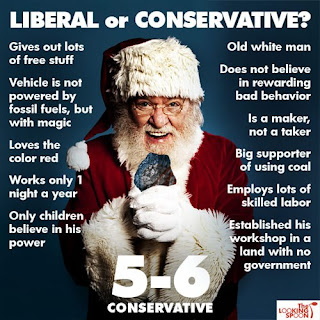 By Jeannette Jaquish at November 28, 2016 No comments:

After the 3rd presidential debate, Fivethirtyeight.com gave Donald Trump an 11.9% chance at winning. This is 11.9 more percentage points than I ever gave him. Trump had no experience in politics, the military, or in civil service. He said things that any one of us would get fired for saying. All he had was name recognition and an ego to match. Don't write off Charlie Sheen for President just yet.

1) Don't write off Libertarians. If Trump can win just by spouting nonsense, then a intelligent candidate running on a well-thought out platform can also win.

2) Progressives, before you ever mention single payer in a serious policy discussion again, try to imagine Mike Pence in charge of your health care. This is why we support smaller government: because we have no clue which incompetent, corrupt clowns are going to be in charge in four, eight, or 20 years. America has survived worse leaders than Trump because their power was limited. It's great to want to help people who lack access to basic needs. But be very wary about asking the government to help. There are other institutions better suited to solve these issues.

3) America has survived and thrived under mediocre and terrible presidents. This is why we have checks and balances. And this is why we have to start getting ready for the midterms.
By Robert Enders at November 09, 2016 No comments: