Forget the cost for a moment. This will decrease graduation rates.
As things stand now, high school students in Fort Wayne already have the option of taking extra classes by coming into school earlier or by attending summer school. Some do it to get ahead, but many do it to avoid falling behind. By requiring every student to attend longer days year round, it makes it harder for kids who want to catch up to do so.
By Robert Enders at September 29, 2010 2 comments:

Email ThisBlogThis!Share to TwitterShare to FacebookShare to Pinterest
Labels: education

We pledge to honor the Constitution as constructed by its framers and honor the original intent of those precepts that have been consistently ignored – particularly the Tenth Amendment, which grants that all powers not delegated to the United States by the Constitution, nor prohibited by it to the states, are reserved to the states respectively, or to the people.

Suppose Proposition 19 passes in California. Will the 112th Congress still respect the Tenth Amendment? Or will Californians be subjected to laws imposed on them from the other side of the continent?
By Robert Enders at September 24, 2010 1 comment:

Is the recession over?

I will pretend to believe that the recession is over if Congress and the President stop trying to fix it. Would you want to be treated by a doctor who just told you that you were healthy? Especially if he was not able to predict the effects of all his previous treatments?
By Robert Enders at September 21, 2010 1 comment:

Email ThisBlogThis!Share to TwitterShare to FacebookShare to Pinterest
Labels: Economics

Suicide terrorists are like roaches. There are way more than the ones you see because they are always hiding You can never hope to scare them off, none of them are smart enough to be afraid of you. Sometimes you can kill them when they come out into the open, but that doesn't happen very much and often you don't see them until it's too late. You can devise ways to kill them where they hide, but as stupid as they are, they still find ways to adapt.

The best way to deal with roaches and terrorists is to deprive them them of what they feed on. Roaches live off of filth. Terrorists feed off of hate and fear.
By Robert Enders at September 11, 2010 3 comments:

Companies rise and fall. Sometimes between that rise and fall, a company will relocate. It sucks when they move from here to there, it's great when they move from there to here, but on the whole it creates undesirable uncertainty for locals. A city might lose 1000 jobs one month and gain 1000 jobs the next, but wouldn't you rather keep the original jobs if you could?

While companies have a right to move from state to state, (and should do so if it means staying competitive) states and cities should not encourage arbitrary corporate migration. Indiana should pursue a reciprocal agreement with other states that they will not use tax dollars to lure a company away from another state. In other words, we won't steal your jobs if you promise not to steal ours. A federal law would be nice, but Congress has been unpredictable as of late.

Interstate job poaching is a drain on state resources. Rather than spending millions to attract companies that will only stay until they get a better offer, states should reaffirm their commitment to companies that are in it for the long term.
By Robert Enders at September 09, 2010 8 comments: 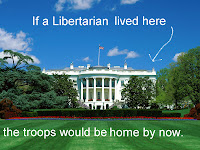 Should Drinking Be Mandatory?

Governments discourage and forbid the use of certain drugs because they are bad for your health. But if a drug has been shown to have positive health effects, should the consumption of that drug be mandatory?

It could make for some interesting pickup lines:
"Can I buy you a drink?"
"No, thanks."
"It's the law, toots."

Does anyone else get the feeling that scientists keep finding medical benefits for politically correct drugs?
By Robert Enders at September 02, 2010 No comments: