Monday evening the road collapsed on US Highway 27 northbound, south of State Boulevard, just before the Kroger Fueling Station. This incident caused major headaches as the road in question is a primary route through town and the lights are timed at 28-32 miles per hour to make traffic flow smoothly, typically a twenty minute trip one way. According to an interview given to Stephen Parker @ Around Fort Wayne by Rachel Blakeman, a former blogger, and current Public Information Officer for the City, they checked all possible causes and their working position now is that a water main break ten years ago caused the soil to move or become settled and therefore caused the road pavement to buckle under and take the City on a wonderfully (35 miles per hour, across a 12 inch dip in the road, on a curve, at night) fun ride. The City hopes to have the road repaired, at a cost of 26 thousand dollars (INC 23 September 2009), by Friday, weather permitting. The only question left to ask now is, Does the City need to go back and check the sites of all other previous water main breaks to prevent this from happening yet again?

My Problem With Local Broadcast Media

This incident was responded to promptly so I wont critique the City on interdepartmental communication this time but I will critique the local broadcast media establishments for not broadcasting the traffic alert at the bottom and top of the hours as the incident unfolded and progressed. Most of the radio stations that I tuned into were on national syndication at the time with no one answering phones or able to announce the obstruction to traffic on the air. Maybe we need to take stock in what we want from local radio? I am not saying that national shows and prerecorded programs are a bad thing, but when there is no one present to put out the traffic advisory for such a major road closing, or receive up to date information from average citizens at the event's occurrence, we begin to see another issue at play. What does that say about the intention of these people we entrust with our airwaves?

That is right, our airwaves! Publicly owned airwaves!

This isn't an issue of local only it is an issue of local at all. Most radio stations rely on the prepackaged or syndicated programs to fill time and just milk the advertising dollars from such programs. I miss the days of long term, local hired, Disc Jockeys (excuse me, Personalities) whom actually get involved in the Community they serve and do more than slut out the top 40 list every couple of hours, we need more indie and local music.

We need independent stations that aren't owned by conglomerates in the same market. We need to celebrate the arts and music but also receive our news and commentary from many different sources rather than allowing one or two stations to provide every comment or thought from a biased, small minded, position of assumed public trust. We need to start having public conversations again on air and actually invite the best people to the airwaves not just the ones who have the loudest mouths or the most clout in the industry or social landscape.

Allen County needs its own radio station that celebrates the people, arts and music, cultures, reports the news, and offers a balance of commentary on everything. My only question, Whom is willing to start providing and maintaining a truly free press for everyone to participate in? Are You?

EDITOR'S NOTE: THIS POST IS CROSS POSTED ON MY PERSONAL BLOG WITH PICS & COMMENTS.
By F6's Editor at September 24, 2009 2 comments:

LPIN Hosting Do You Think You Wanna Run For Office Workshop

The Libertarian Party of Indiana is hosting a free Saturday Seminar entitled Run! A Candidate Training Seminar on Saturday the 10th of October from 11am-3pm at The Market Square Center's 7th Floor Conference Room 151 N. Delaware Street in Indianapolis. Please RSVP to Chris Spangle (LPIN Executive Director) via email (lpinhq@lpin.org) before the 9th of October. If they run out of space, there is a good chance we will hold this a second time. Topics will include: Beginning the Race, Maintaining Effective Messages and Responses With The Public, Volunteer Staff Management, Funding, Announcing Candidacy, Avoiding the Penalties, and a Finish with Finesse. We'll also have time for basic Q & A, help with paper work, and have a photographer for head shots! If you aren't able to attend, we'd still love to know if you're interested in running. Please fill out this form so we can contact you!
By F6's Editor at September 21, 2009 No comments:

The Next Business Meeting of the Libertarian Party of Allen County is on Monday the 21st of September 2009 from 6:45-8:15 pm in Meeting Room B at Main Branch of the Allen County Public Library. Please enter off the Webster Street entrance and proceed to the left for easiest access to the meeting rooms. Our Guest Speaker for the evening will be Ronald Heilman of Hoosiers for Fair Tax there will be a presentation @ 7:10 pm followed by a question and answer session. We will be providing Pizza from Little Caesars, and a small assortment of Pepsi
products. We request a small donation to help to cover food costs.

A. Call Meeting To Order

B. Minutes from the last meeting read and approve

I am working on a new mailing system so please anticipate future announcements to come from a generic email address plus this blog, facebook, and the website. If you wish to update your email and any other contact information, doing so at this meeting will be of great assistance.

I can see how some might view it as racist if someone criticizes Obama for spending too much if that same person did not criticize Bush for the same practice. (Libertarians have been critical of both Bushes and Obama.) But there are other plausible explanations for the inconsistency:
1. They were not aware of Bush's spending practices.
2. They have become more fiscally conservative.
3. Bush's spending was beneath their threshold but Obama has exceeded it
4. They are party hacks.
By Robert Enders at September 18, 2009 1 comment:

Libertarians At Large Tonight 7-8 PM. Tune In, Call Up, Get Involved! 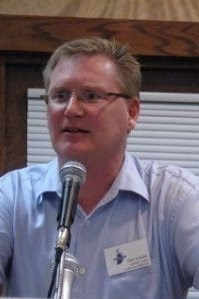 Libertarians At Large airs on channels Comcast 57 and Verizon 27, from 7-8 p.m., every third Thursday of the month. Tune in tonight as Doug Horner's guest this month will be Libertarian, Dan Drexeler, our State Party's Vice Chair. Call in to ask questions or just let us know you are listening. Please contribute to the conversation.

The Libertarian Party of Allen County would like to thank Access Fort Wayne and the Allen County Public Library for providing us these opportunities to serve the public and promote the discussion at all levels of government about what is best for the future of of our communities, state, and nation.
By F6's Editor at September 17, 2009 No comments:

Email ThisBlogThis!Share to TwitterShare to FacebookShare to Pinterest
Labels: Libertarians AT Large

Why not provide healthcare to illegal aliens?

Democrats insist that healthcare is a fundamental human right. Aren't illegal aliens human too? Isn't national origin simply another pre-existing condition? The fact that illegal aliens will not be covered under any proposed plans suggests that Obama's motives for healthcare reform are political and not humanitarian.
By Robert Enders at September 14, 2009 1 comment:

I have some hope that the current crisis is at least half over. The fog of war keeps us from knowing the enemy's capabilities. The uncertainty of it all is more scary than the actual danger. You are more likely to die in a car wreck, but at least you know the odds.

How will it end? Sooner or later we'll have to negotiate with the Taliban. The Continental Army did not kill every Loyalist, the Union did not kill or capture every Confederate, and there are ex-Nazis resting comfortably in German retirement homes. We'll bring the troops home. If we don't get attacked again, we can call that victory. If we do get attacked again, we'll reinvade.
By Robert Enders at September 11, 2009 2 comments:

One of our key members has had a family emergency. This person is critical to the success of our fundraising events, as a result the LPAC yard sale has been postponed for 2 weeks.

UPDATE: It is going to be rescheduled for the 19th a/o 20th of September. This allows time for you to donate still any items in good condition you wish to the LPAC. Please contact the Secretary @ 260-312-2200 to arrange pick up or delivery of your donations. Thanks also goes towards those whom have already donated.
By Robert Enders at September 07, 2009 No comments:

We need a new word

Some people claim to hate labels, but the fact is that we need them to communicate effectively. You are only permitted a finite number of characters in your social network profiles, so words like "liberal", "conservative", and "libertarian" come in handy when describing your beliefs or the beliefs of others.

What am I supposed to call a person who advocates handing taxpayer dollars over to a company without expecting anything in return? Suppose there was a cut in corporate subsidies; what name would be on the buttons and banners of those who oppose the cut? I can't imagine that anyone would organize a "Rally for Corporate Welfare", but there is clearly some support for these programs or else they would not exist. Liberals like Michael Moore opposed TARP and the Big 3 bailouts, and so did conservatives like Rush Limbaugh.

So what do we call these people? TARPists? Tarpies? I'm not trying to be insulting, I just don't know what to call a person who takes money from the working class and gives it to a dysfunctional company. I do try to be fair to people on the other side of a debate by calling them the name that they choose for themselves. I'm going to go with "Tarpy" until one of them suggests a better name.
By Robert Enders at September 03, 2009 8 comments: